Saddle of venison on bolete sauce, black dumplings with fat and stewed apples with blackberies

Marinate the saddle for 12 hours (other venison parts for 1-2 days). Lard with bacon, season with herbs, fry in clarified butter on each side, baste with red wine and stew for a short time.

Prepare black dumplings of boiled potatoes, several grated raw potatoes, potato flour (1/4 of potato volume) and eggs. Form dumplings with a hole in the middle and boil them in a large amount of boiling salted water. Peel apples, remove seed pods and cut into halves. Fry in butter, baste with wine, add blackberries and stew for a short time. Season with sugar and cinnamon to taste.

Sauce
Melt honey in a frying pan, add cowberries and baste everything with honey liqueur. Press half of the sauce through a sieve and bring to boiling again. Season with colourful pepper and salt, and mix with whole cowberries. Put the sirloin on the cowberry sauce with a portion of stewed apples and black dumplings poured over with meat fat (in traditional Silesian cuisine the sauce is poured over the dumplings and not the meat, yet this is court cuisine so the meat is placed on the sauce, and the dumplings must be poured over with fat so that they are not too dry and can be easily swallowed). Decorate with blackberries, cowberries and herbs. 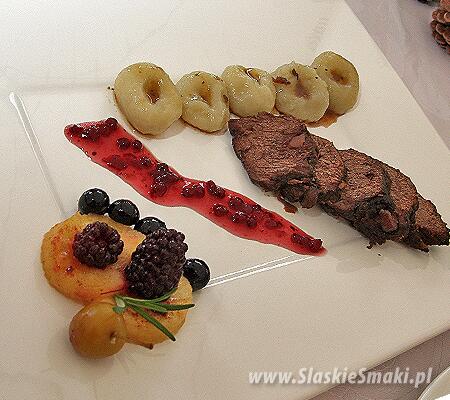 This meal was prepared by the Oskar Lange Group of Economic Schools from Wodzisław Śląski during the 4th “Silesian Tastes Festival 2009” in Pszczyna.